The 2012 Turner Prize nominee Luke Fowler is known for his film portraits of famous persons, for example the Scottish psychiatrist and schizophrenia researcher Ronald D. Laing (1927–1989) or the Marxist historian and Cultural Studies co-founder Edward Palmer Thompson (1924–1993). Combining newly shot material with archive footage as well as interviews and photographs, Fowler’s films can be classified as documentaries; at the same time, they take that genre to its limits. A further key element in Fowler’s work is sound, which he utilizes in his films in a similarly analytical and hermeneutic manner as he does imagery. A resident of Glasgow, the artist looks back on numerous exhibitions, including solo shows at the Kunsthalle Zürich, the Serpentine Gallery in London, the Bergen Kunsthalle in Bergen, Norway, and the Bielefeld Kunstverein.

LUKE FOWLER, "TO THE EDITOR OF AMATEUR PHOTO­GRA­PHER"

Anthropology and philosophy influence Marine Hugonnier’s films, which oscillate between documentary fiction and truth. What needs to be seen and what withheld from the public? With these questions London-based Hugonnier takes a critical and self-reflective approach to visualizing the world through film, following in the footsteps of Godard or ethnographic film maker Jean Rouch. In her last film from 2013, “Apicula Enigma” (meaning, the mystery of the bee), she takes a stand against the instrumentalization of animals and the usual comparisons drawn between bee colonies and society’s political order. In so doing she deconstructs the mechanisms of nature and animal documentaries and using the technological resources of cinema draws close to the actual order of a bee colony. Born in France, Marine Hugonnier has had exhibitions in Gateshead (UK), Seoul, Malmö and Bern, among others.

The most important step in the work process of London-born Heather Phillipson is editing a film. She either simply takes her film material from the Internet or shoots brief film sequences herself with a handheld camera. For Phillipson it seems the portrayal of decisions that link the images together and that in this way make the whole work (be it a film, installation or text) seem contradictory, serves as proof of a reality understood not as a goal but as the starting point. “Coherence is tyranny”, says Phillipson, who also works as a writer and whose artistic output is based on language. In her films, language serves as both the illusion of a red thread and also to unsettle what you seeso that a third element appears to arise from the combination of voice and image.

HEATHER PHILLIPSON, "A IS TO D WHAT E IS TO H"

The Schirn Kunsthalle Frankfurt is presenting the video work “My Throat, My Air” (2013, 16 min.) by Leipzig-based artist Loretta Fahrenholz. The artist’s film “My Throat, My Air” is set in a quite plain petit-bourgeois apartment not far from the Alps. The interior, the furnishings, decorations and accessories are so commonplace that the viewer can immediately decode them. Former Fassbinder actor Ulli Lommel, his partner Tea Brown and their children act out scenes from everyday family life in their apartment.

Yet the acting and staging overstate the clichés in such a way that they seem to come from a different reality. Thus at the beginning the female protagonist, in the role of the sexy pilot, asks a man in a baseball cap whether he is willing to accompany her into another world, a world in which you simply exist. The film is inspired by family narrative forms that enable alternatives to the lower middle class norm of the nuclear family, namely U.S. movie “Mrs. Doubtfire” (1993) and R. W. Fassbinder’s sci-fi radio play “Keiner ist böse und keiner ist gut” (Nobody is Bad and Nobody is Good, 1972), in which confinement, intimacy and transgression equally find expression. Following “My Throat, My Air” at the Schirn, Fahrenholz is to show her favorite film, “The Connection” (1961, 110 min.) by American director Shirley Clarke. Loretta Fahrenholz (born 1981 in Starnberg) studied at the Academy of Visual Arts Leipzig as master student under Astrid Klein. Her works have been shown, among others, at Halle für Kunst Lüneburg, the 2014 Shanghai Biennale, Astrup Fearnley Museum Oslo, Arnolfili Bristol and White Columns New York. In 2014, she participated in the exhibition “Thinking in Film” at Kunst-Werke Berlin.

LORETTA FAHRENHOLZ, "MY THROAT, MY AIR"

In her films Warsaw-based artist Agnieszka Polska (born 1985) generates a form of historiography that addresses the influence memory and time have on our collective social recollection. Fine art often forms the starting point for her films. In her piece “Future Days” (2013, 29 min.) long deceased artists meet for the first time. Here, painters Jan Ader and Paul Thek and sculptor Charlotte Posenenske encounter each other as fictional characters. They wander about in Polska’s film, suddenly discovering traces of a lost artwork by Land Art proponent Robert Smithson, entitled “Partially Buried Woodshed” (1970). Disappearance emerges as the film’s multi-layered leitmotif, coming alive in the artist’s inquiry into the forgetting that takes place situationally in our memory., Spanning photography and film, Polska’s works have already been shown at several biennials, most recently in Sidney in 2014, as well as in solo shows in the Belvedere in Vienna (2012) and in Nottingham Contemporary (2014).

In her work, Hanna Hildebrand engages with finding the extraordinary in the ordinary. The artist, who was born in Italy in 1978, works mainly in performance and film. In the context of the Double Feature series, the artist presents her current piece, “Helianthus Coco” (2015, 15 min.), which is still in production. Subsequently, Hildebrand will be showing her favorite film, “Ace in the Hole” (1951, 111 Min.) by American director Billy Wilder.

It tells the story of unsuccessful reporter Charles Tatum. The latter ruthlessly exploits all possibilities to turn a tragic misfortune into a major story, desperate to seize what appears to be his last opportunity to become a reputable agent in his field. Wilder’s film is an almost cynical criticism of the perfidious practices of the boulevard press. Hanna Hildebrand, who studied at Frankfurt’s Städelschule, where she was a student in Tobias Rehberger’s master class, won the Swiss Art Award in 2013.

“The Last Smoking Flight” (2008) is the start of a trilogy by Gabriel Lester: A group of people on a journey to nowhere are trapped in a small aircraft between clouds and smoke. The passengers are pensive, lost in a reverie just as the aircraft is lost in space and time. The Dutch artist describes his approach as “cinematographic” though film or video are not always used. Embracing all conceivable media, he seeks to occupy space and time but without proclaiming clear messages or ideas. Rather his works are intended to encourage observers to become aware of how perception functions and what it is composed of, while at the same time encouraging viewers to revise their understanding of the world and relationship to it. Lester’s installations and films have featured in numerous exhibitions and festivals, such as documenta 13 in Kassel, the Biennale of Sydney and at Bonner Kunstverein.

With his cinematic works American Riley Harmon addresses questions about his own identify and identification, about reality and simulation. He employs excerpts from Hollywood movies or works by other artists and expands, alters and edits them to create a new, independent work. For “Quad”, for example, Riley uses the performance “Quad” by Samuel Beckett, altering its choreography and adding sound he designed himself. In “Passengers” he begins with various auto scenes from Hollywood movies, removes one of the protagonists from the film and inserts himself instead, becoming a silent actor seeming to face someone else. Many of Riley’s works are dominated by this play of reality, fiction and cinematic montage. In the process the divides between shooting and film material, between actors, performers and real characters, between appearance and reality become blurred.

Tai Shani is a narrator. In cinematic, literary and performative adaptations of them, her stories repeatedly revolve around the self, which she expands, questions and criticizes. The classic theater with its roles, costumes and sets serves her as a basis for work with film, performance and music. For example, she positions archetypal and pseudo-historic characters in front of neo-baroque images. In Tai Shani’s work artistic forms of expression not only merge into one another, but also occur in isolation. For her current project “A City Of Women”, Tai Shani develops a stage-like performance room consisting of columns, in which man and film address “Le Livre de la Cité des Dames” a feminist book by French author Christine de Pizan written back in 1405. Tai Shani has had numerous exhibitions, for example in the Barbican, Hayward Gallery and the ICA in London.

On his trip through Europe Samson Kambalu produced a series of short films that he describes as “Nyau Cinema”. Each of these films lasts no longer than a minute, is based on site-specific spontaneous performances, and takes place in urban space. In the film, the limitations and conventions of everyday life are playfully transgressed. The works of Samson Kambalu are characterized by his interdisciplinary approach. As an artist, film-maker and author he draws on a wide variety of fields and combines differing topics such as modern art history, silent movies and South-East African traditions. Kambalu studied Art and Music Ethnology in Malawi, has already published two prize-winning novels – “The Jive Talker” and “Uccello’s Vineyard” and his works features in international exhibitions for example, the Liverpool Biennial, Tokyo International Art Festival and “All the World’s Futures” at the Venice Biennale 2015.

In her expansive installations and video works French artist Émilie Pitoiset explores the options for constructing narrations, which fluctuate between fiction and documentation. In the process the limits of the individual’s perception are tested. The need to differentiate between truth and illusion is not met. In “The Third Party” masked people stride, move and dance in time to the music through office corridors, as if they were performing an unfathomable rite of a secret society. For Pitoiset every element, every film, every artwork, every exhibition is part of the large-scale narration she continually writes. Pitoiset has already been exhibited in group exhibitions in Centre Pompidou Paris, Palais de Tokyo Paris, Forum d’art contemporain in Luxembourg and in Nassauisches Kunstverein Wiesbaden.

More artists in the series 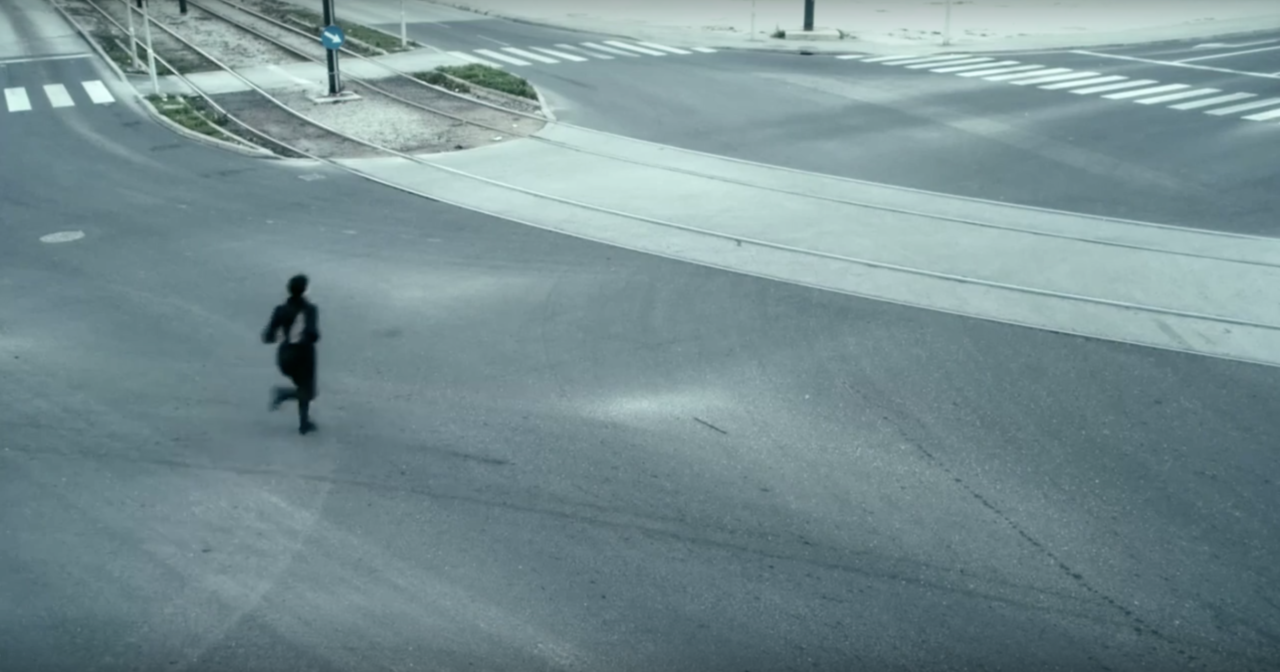 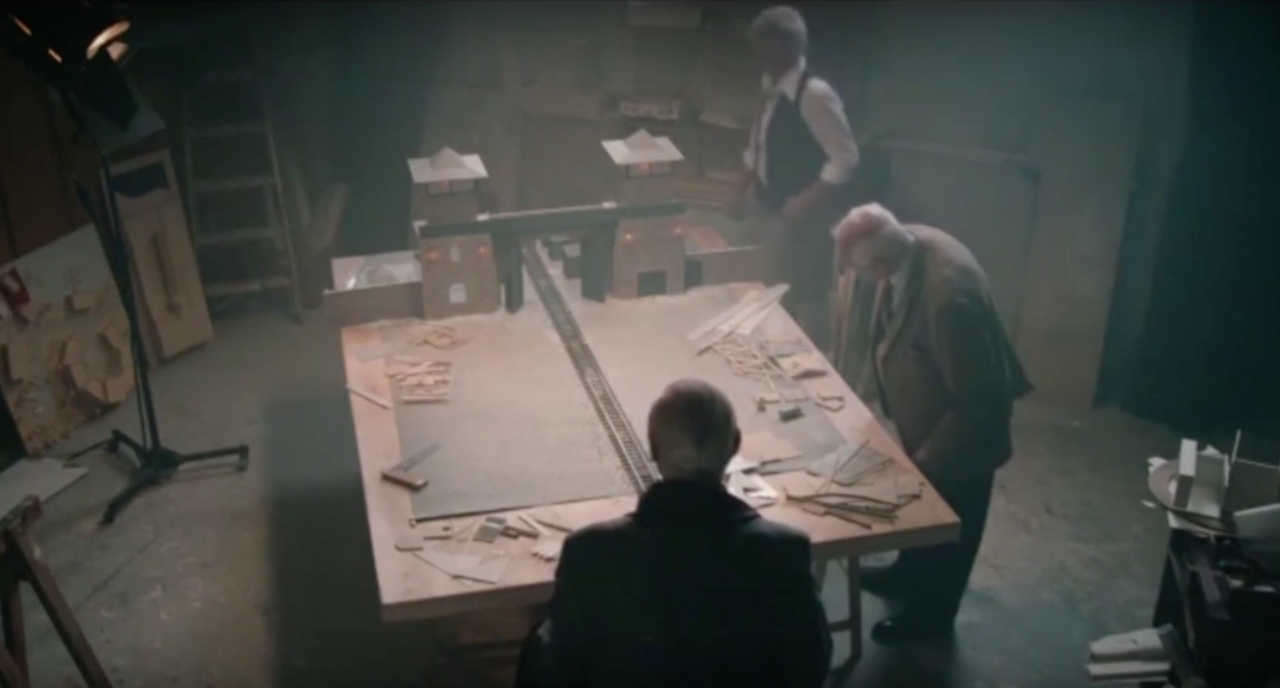 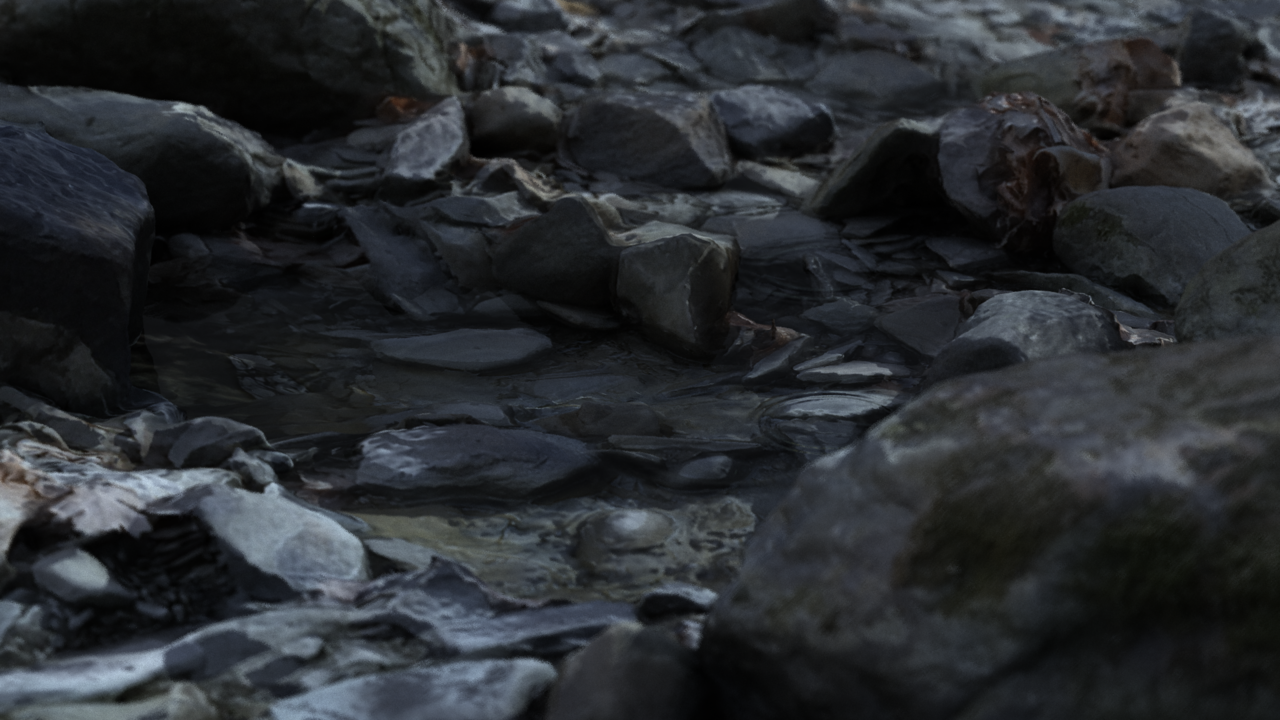 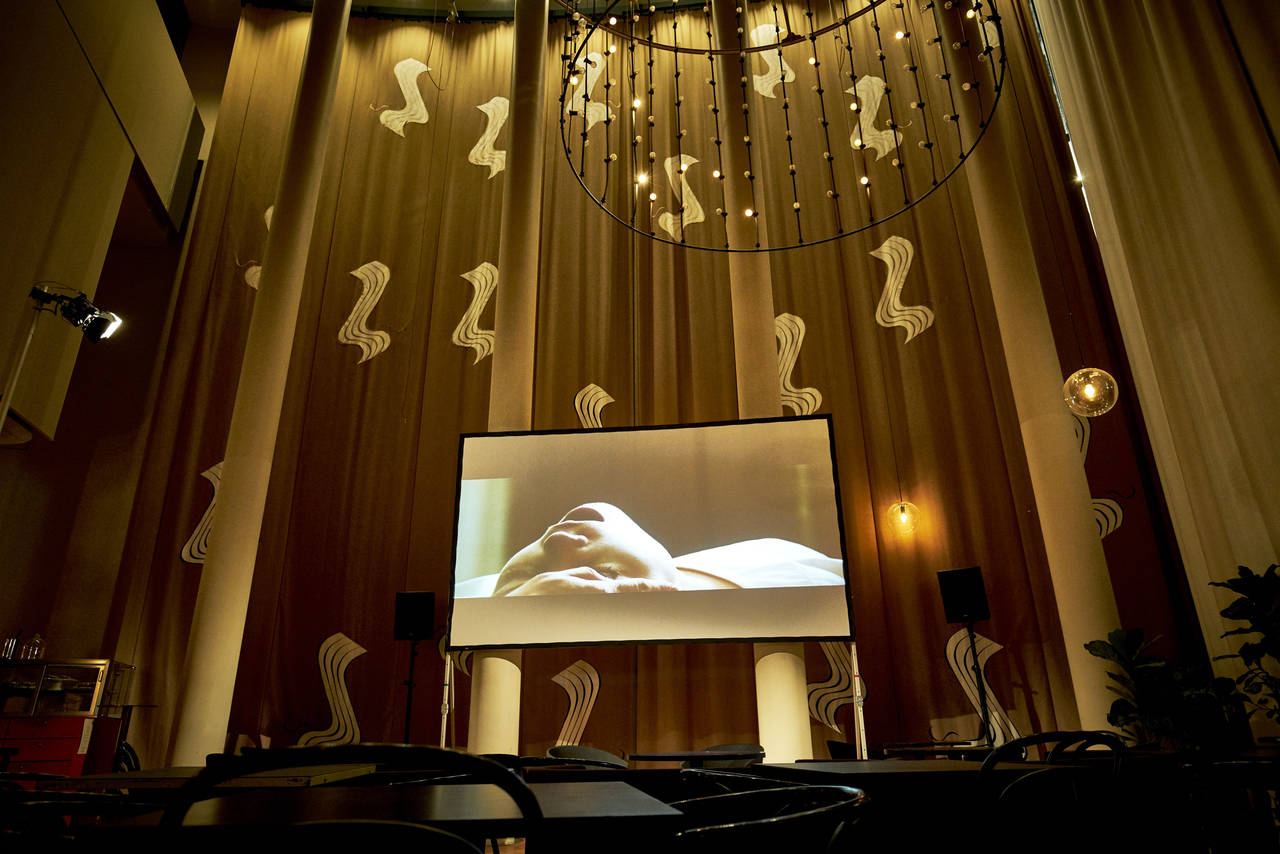